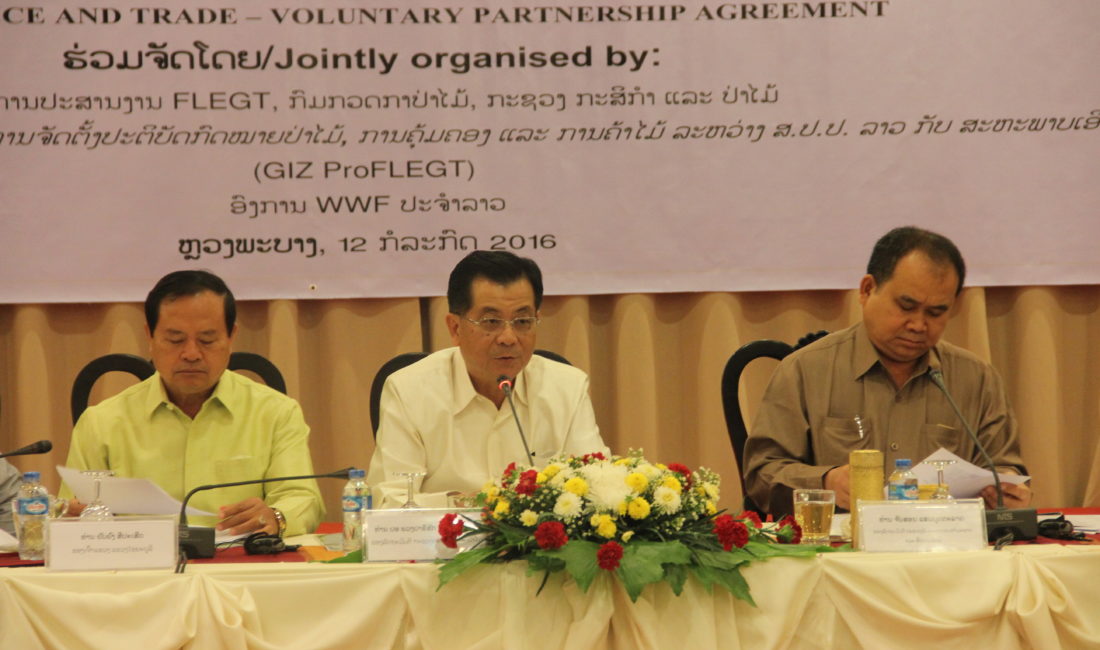 A remarkable outcome has been witnessed after the Prime Minister of Lao PDR has issued the Order No. 15 On “Strengthening Strictness of Timber Harvest Management and Inspection, Timber Transport and Business” in the battle to clamp down on the notorious illegal trade of logs and semi-finished products to neighbouring countries, as highlighted during the workshop on “the Second National Steering Committee Meeting on Forest Law Enforcement Governance and Trade-Voluntary Partnership Agreement” held in Luang Prabang on 12 July 2016, chaired by Dr. Phouangparisak Pravongviengkham (Vice-Minister of Agriculture and Forestry and Chief Negotiator for Lao EU-FLEGT VPA) and co-chaired by Mr. Chanhsone Sengbouttalath (Vice-Minister of Natural Resources and Environment), Mr. Bounsavath Boupha (Vice-Minister of Justice), Mr. Souksamay Chanthamath (Vice-Governor of Attapeu Province), Mr. Bounmy Phimmasone (Vice-Governor of Khammouane Province), and Mr. Yanyong Sipaseuth (Vice-Governor of Sayaboury Province).

This workshop was organised with the objective to review the progress and roadmap of FLEGT process. It also comes alongside the Prime Minister Order No. 15 to strengthen timber management and trade for the country.

Good forest governance and management will ensure that Lao timber trade could gain access to major timber markets such as ASEAN, China, Korea, Japan, USA and the EU. This initiative is also in line with the objectives of the Lao EU-FLEGT (Forest Law Enforcement, Governance and Trade) process, an initiative of the Government of Lao PDR currently embarking on to promote good governance in the forestry sector and legal timber trade, especially with the European Union.

During the second National Steering Committee meeting, Mr. Sousath Sayakoummane, Director General of Department of Forestry, Ministry of Agriculture and Forestry, expressed that “the new PM order No. 15/2016 aims to strengthen the implementation of forest management, timber business, timber extraction, timber processing and timber trade to ensure strict compliance to the laws and regulations issued inviolably by the Government of Lao PDR, to simultaneously prevent, oppose and resolve the negative phenomena within the forest sector in order to reduce and incrementally eliminate them”. “The work of FLEGT process will especially with the improved timber flow monitoring in the pilot provinces endorsed by the Minister of MAF surely support the direction and enforce the Prime Minister Order No.15 and fight deforestation as one of the core elements of FLEGT process is to define what legal timber is, where it comes from and how to monitor its movement in the supply chain process”, he added.

The legality definition of timber forms an important component of Timber Legality Assurance Systems that are part of Voluntary Partnership Agreements (VPAs). VPAs are trade agreements between the EU and timber producing countries, aiming to promote legal logging and its associated trade. The partnerships ensure that only legal timber products enter the EU market, promote good forest governance and law enforcement in the producing countries and take into account social and broader environmental considerations.

One of the concrete outputs that has been highlighted by Mr. Khamphout Phandanouvong, Director General of the Department of Forest Inspection (DOFI) during the Meeting is the Forestry Legality Compendium. “The Forestry Legality Compendium is a comprehensive review of the legal framework for the forestry sector in Laos along the supply chain of timber products – starting from forest land classification, demarcation, inventory, quota approval, management and harvesting, transport, processing and export”. “The Forestry Legality Compendium is the foundation for the first draft of the Timber Legality Definition for natural production forest that has been developed and – together with the scope of the VPA – shall be discussed during the first FLEGT/VPA negotiation, envisaged for the last quarter of 2016, between the Government of Lao PDR and the European Union”, commented further by Mr. Khamphout.

Mr. Thongsavanh Soulignamat, the President of the Lao Wood Processing Industry Association particularly for Finished Wood Products, stressed that “the new Prime Minister Order (No. 15/PM) will enable more value adding by the national wood processing industry through the improvement of the sustainable and legal supply of raw materials and increased qualification of staff and workers in the wood processing industry. “To materialize this, two urgent tasks are needed, that is, the implementation of a sector strategy for the  wood processing sector to strengthen international competitiveness of Lao finished goods and the development of a mandatory national Chain of Custody (COC) for wood processing companies to keep track on timber input-output monitoring and legal origin of timber”, he added.

Laos has started to negotiate such an agreement with the EU, with assistance from the German Development Cooperation’s project ‘Support to the Lao EU-FLEGT Process’ (ProFLEGT), implemented by GIZ (Deutsche Gesellschaft fuer Internationale Zusammenarbeit).

ProFLEGT is a joint initiative of the Lao Government and the German Development Cooperation. It is working closely with the Ministry of Agriculture and Forestry (through the FLEGT Standing Office under the supervision of the Department of Forest Inspection, DOFI), Ministry of Industry and Commerce, and Ministry of Natural Resources and Environment, as well as other Government agencies, civil society organisations, academia and timber processing industry.

During the initial stage of the Lao EU-FLEGT process, three pilot provinces have been selected, which are Sayaboury, Khammouane and Attapeu. In this regard, WWF is working with the Department of Forest Inspection (DoFI) to implement its FLEGT project in support of the Lao EU-FLEGT process in the two pilot provinces (Khammoane and Attapeu provinces). WWF takes a solutions-oriented, integrated and local to global approach that seeks synergies with relevant stakeholders to influence drivers of deforestation and degradation.