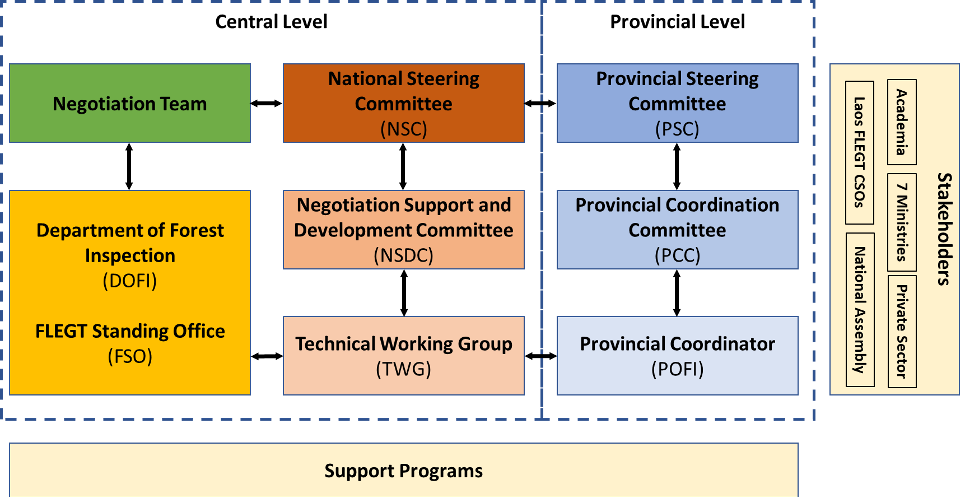 The National Steering Committee is a special unit recently established by the Government of Lao PDR, with a mandate to coordinate, plan, and direct the Negotiation Team and the Technical Working Group in order to ensure a fruitful Voluntary Partnership Agreement (VPA) negotiation process.

The National Steering Committee has been set up based on Decision No. 65/PMO and meets on a six month or yearly basis.

The mandates for the National Steering Committee are:

The National Support and Development Committee (NSDC) has the ownership on the consultation, review and verification the Timber Legality Definition (TLD), Timber Legality Assurance System (TLAS) and other Annexes documents which are drafted by Technical Working Group (TWG) and VPA committee.

The Negotiation team drafts a legality definition based on inputs from the multi-stakeholder consultation process. The concrete approach differs from country to country.

To support the FLEGT VPA negotiations between Lao PDR and the EU, Technical Working Groups (TWGs) have been set up based on Decision No. 1915/MAF and revised based on the Agreement 3711/MAF (2019). The TWG now represents the work on the technical level and replaces the former Technical Expert Groups.

The Technical Working Groups (TWGs) comprise individuals and organizations which have specific expertise on certain areas along the timber supply chain and therefore get involved into the elaboration of the Timber Legality Definition (TLD).

Each TWG analyses existing laws and regulations to identify which ones are most relevant for defining timber legality for Lao PDR. Also, possible gaps in the legal framework are being identified. Based on this recommendation are given whether improvement on laws and regulations is needed. After draft TLDs from all TEGs have been put together, field tests will be carried out to assess the practicability of verification against the TLD. Findings from the pilot areas will be fed back into the process of finalizing the TLD.

The FLEGT Standing Office is a secretariat established to provide coordination support to all stakeholders working with FLEGT, including the EU. It has been set up and is equipped with trained international and national staff, who work closely together on the preparation of a future VPA.

As an additional entity to the Department of Forest Inspection, the FLEGT Standing Office has the important task to engage, coordinate and build bridges between all relevant stakeholders.