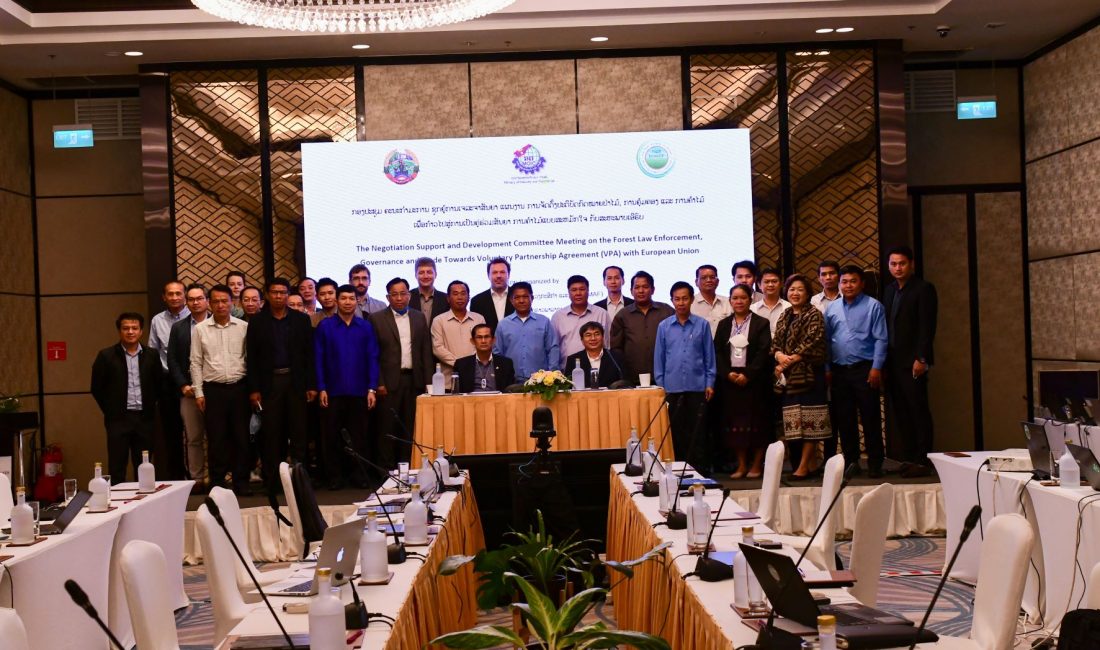 To support the 5th VPA negotiation between the Government of Laos and the EU, the National Steering and Development Committee (NSDC) to the Lao Forest Law Enforcement, Governance and Trade (FLEGT) process met on April 7 and 8. The meeting was co-chaired by Mr. Somphone Kaohavong, Director General of the Department of Forest Inspection and Mr. Sousath Sayakoummane, Director General of the Department of Forestry, with the involvement of nearly 40 delegates from the concerned ministries, private sector, civil society, the EU Delegation in Lao PDR and European Forest Institute (EFI). The main objectives of the meeting were to (i) update on the achievements and challenges of the Lao FLEGT-VPA process, (ii) discuss and endorse the VPA technical annexes to be negotiated in JEM 5, (iii) endorse a provisional VPA Roadmap for EU’s consideration, and (iv) update NDSC membership.

In the end, the following key conclusions were reached: (i) provisionally endorsed the VPA Roadmap for EU’s consideration (which suggests TechEx in May, NSDC in August/September, and JEM 5 in October 2022); (ii) conditionally endorsed 3 VPA annexes (Annex II: TLAS Annex (appendices A and B), Annex V: TOR for independent evaluation , and Annex VII: Public disclosure of information); (iii) agreed to continue piloting of TLAS annexes (verification, imported sources and due diligence procedures); (IV) agreed to develop regulation for supply chain control of confiscated timber; (v) agreed to improve TLAS text based on the agreed points and (vi) agreed for FSO to officially communicate with EU to start drafting the remaining VPA annexes.

In addition, the participants were informed about the directions of the revised EU Timber Regulation to ensure deforestation-free products enter the EU market, which may have general implications on the management of forest resources in Laos particularly, on the Lao FLEGT VPA process.

Most of participants evaluated this NSDC meeting to be the most ever successful and the next NSDC meeting is scheduled between August and September 2022 following the same protocols.