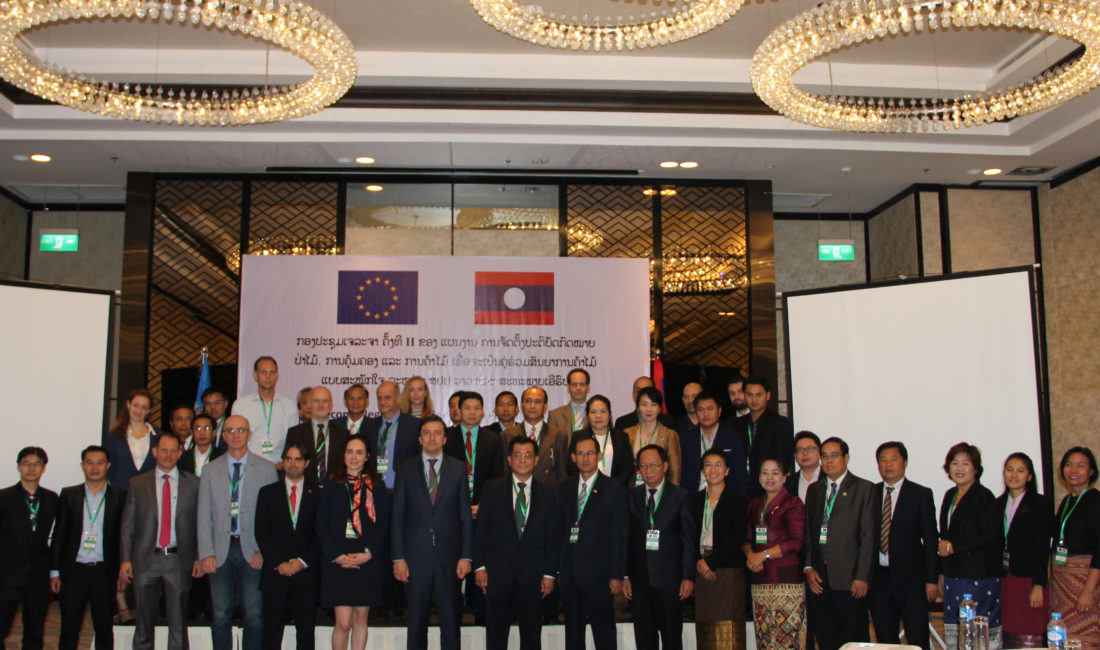 ‘The Government of Lao PDR is committed to combat illegal logging and its devastating social, economic and environmental impacts,’ said Dr. Phouangparisak Pravongviengkham, Vice Minister of Agriculture and Forestry. ‘Our on-going implementation of Prime Minister Order No. 15, which focuses on strengthening the strictness of timber harvest management, inspection, transport and business, has already made some advances to that end,’ he said. ‘In fact, we believe that PM No. 15 and FLEGT VPA process are mutually supportive.’

‘The second round of negotiations with the EU underlines that enhancing forest governance throughout the entire timber supply chain and the conclusion of a VPA remain high priorities on Laos’ political agenda’ Dr. Phouangparisak said.

The two parties discussed the progress made towards the development of a system to ensure the legality of timber, which will verify that timber and timber products comply with national laws and regulations. Since the first face-to-face negotiations in April 2017, the Lao side has further elaborated on various elements of this system. It has further progressed on the development of the timber legality definition, which identifies the national laws and regulations Lao PDR will use to indicate legality of timber. Lao PDR has initiated discussions on timber legality assurance system with a focus on supply chain controls, from the forest to the point of export, and verification processes, which will check that timber and timber products comply with the requirements of the legality definition and of the supply chain.

‘Together, the EU and Laos are working on good governance and trade in legal timber, which will have positive impacts on the forest sector in Laos, but also internationally,’ said Ambassador Leo Faber, Head of the EU Delegation to Laos. ‘Laos has been an important exporter of timber products to major regional markets such as China and Vietnam, both of which are also engaging with the EU on forest governance and law enforcement. We value Laos’ determination and commitment to sustainable forest management, which is an objective that FLEGT shares.’

The EU also highlighted the good example that Lao PDR has set with its multi-stakeholder approach to the VPA. In turn, Lao PDR confirmed that all VPA commitments have been and continue to be developed in a participatory and transparent manner with the involvement of representatives from the Government, private sector and civil society. The EU and Lao PDR agreed on the importance of mitigating potential impacts of the forestry sector reforms on households and small-scale operators.

Following the negotiations, work will continue on defining legality, in particular focusing on conversion areas, plantations, village use forests, confiscated and imported timber, as well as other elements of the system to ensure the legality of timber. The ProFLEGT component of the German Development Cooperation programme ‘Protection and Sustainable Use of Forest Ecosystems and Biodiversity in Laos’ (ProFEB), implemented by GIZ (Deutsche Gesellschaft fuer Internationale Zusammenarbeit), under the supervision of FLEGT Standing Office, department of Forest Inspection, will continue to support the Lao Government and its stakeholders in their effort towards a VPA with the EU.

The FLEGT process has created an unprecedented opportunity for Lao PDR to join a coalition of countries that are fighting illegal logging and improving forest governance around the globe. Currently, 15 countries worldwide are negotiating or implementing VPAs with the EU.