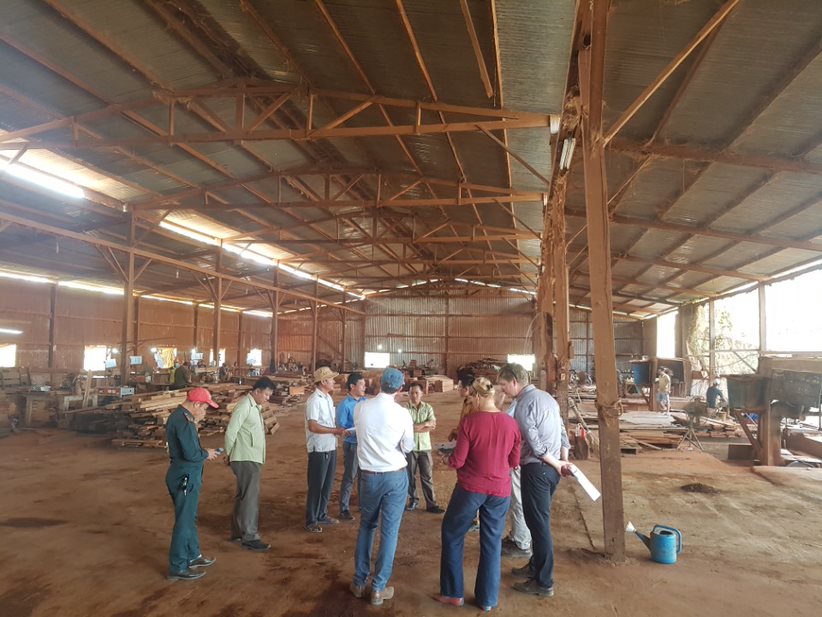 On 27 February a delegation consisting of representatives from the German embassy to Laos, Gesellschaft fuer Internationale Zusammenarbeit (GIZ) and Kreditanstalt fuer Wiederaufbau (KfW) visited Attapeu Province, one of the FLEGT pilot provinces, to understand the implementation and potential impact of German-supported projects on the ground.
The delegation met with representatives of the Provincial Office of Forest Inspection (POFI) and Provincial Office of Industry and Commerce (POIC) Attapeu to learn about their past and future activities as a FLEGT pilot province. During a field visit to Phouvong district, POIC and ProFEB presented its support for setting up an operational control and reporting system to comply with a soon-to-be issued decision on the management and monitoring of timber input and output by the Ministry of Industry and Commerce (MOIC). A company that was part of the piloting support showcased its internal production system and demonstrated critical control points from timber input to the final product. This also included how the management system has been adapted with improved documentation and data reconciliation.
The delegation expressed a strong interest in the activities and highlighted the importance of the FLEGT-VPA process for sustainable forest management and legal timber flow.